The Moscow Kremlin is one of the largest architectural and urban development ensembles in the world. It stands in the centre of the Russian capital on a high hill above the Moskva River. The height of the Kremlin walls, narrow loopholes, paces for staying during the fight and distances between the towers—all these tell us that the Kremlin is a fortress in the first place. But once you enter the Kremlin an impression changes. Spacious squares and beautiful gardens, majestic palaces and an abundance of temples spread out about 28 hectares of territory. The city in the city, which had been forming for many centuries, preserves today Russian architectural monuments of the 14th – 20th centuries. They make an ensemble of Cathedral, Ivanovskaya, Senatskaya, Dvortsovaya and Troitskaya Squares, as well as Spasskaya, Borovitskaya and Dvortsovaya Streets in the Kremlin. All ancient and new Kremlin squares form a single urban whole, but each has its specific history and unique architectural appearance. 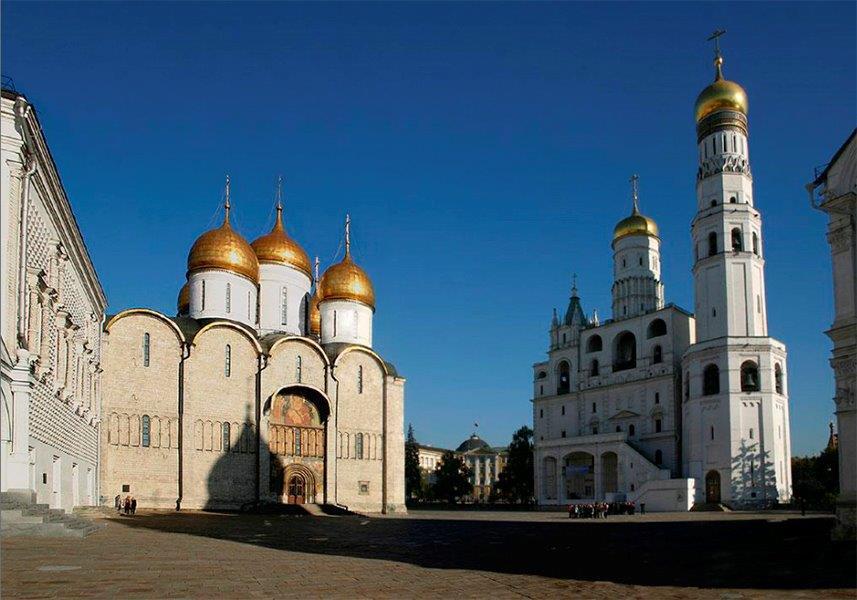 Located in the centre of the Kremlin is the most ancient square of the Kremlin—Sobornaya. It has preserved a unique medieval architectural and urban planning ensemble. The basis of the square planification was laid in the first half of the 14th century, when by decree of Moscow Grand Princes Ivan Kalita, and then Dmitry Donskoy, there were built original white-stone churches on the upper plateau of Borovitsky Hill. They are not extant, but they defined the dimensional composition of the future square, as at the end of the 15th - beginning of the 16th century when Moscow became the capital of the united state, and the Great Prince of Moscow Ivan III was building a worthy residence for the 'sovereign of all Russia' in the Kremlin, new churches were erected in the places of their predecessors.

Today the ensemble of Cathedral Square includes the Assumption, Archangel, and Annunciation Cathedrals, Faceted Chamber, Golden Tsarina's Chamber and churches of the Terem Palace, Church of the Deposition of the Virgin's Robe, Patriarch's Palace with the Church of the Twelve Apostles, and 'Ivan the Great' Bell Tower ensemble. 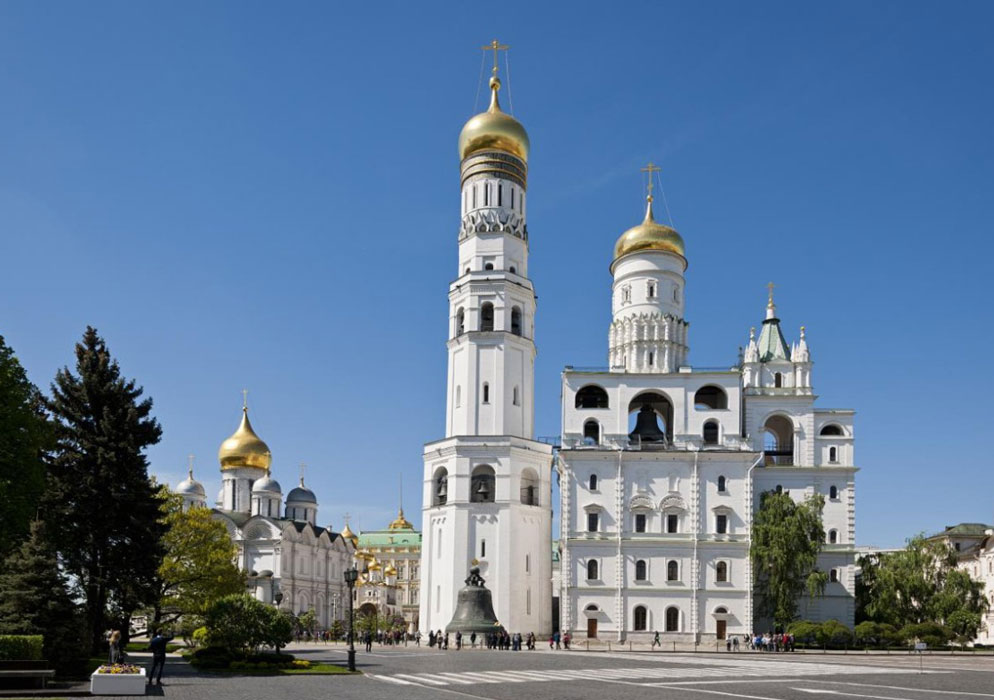 Ivanovskaya Square is the second oldest and significant square of the Kremlin. It had formed to the east of Cathedral Square in the 16th century. Both of them became parts of a single compositional whole, a static core of the Kremlin-city. They oriented to the vertical of 'Ivan the Great' Bell Tower pillar, which emphasized the importance of this centre for the rest of the Kremlin's buildings and the entire Moscow. But unlike Cathedral Square, Ivanovskaya Square has almost entirely lost its medieval appearance. Its southern side is open to the Great Kremlin Square and the Moskva River. Its northern side smoothly turns into the space of Troitskaya and Senatskaya squares of the Kremlin. 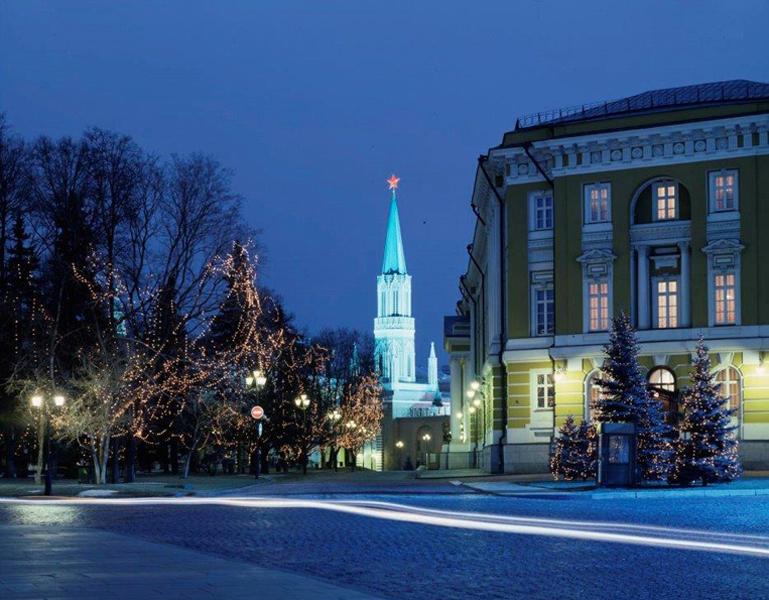 In the 18th and 19th centuries, large-scale palaces and administrative buildings replaced many medieval architectural complexes located in the Kremlin. They formed ensembles of new squares created according to the principle of regularity and symmetry.

The beginning of the first formal square in the Kremlin - Senate Square - is associated with constructing a large-scale Arsenal building along the Kremlin's wall between Troitskaya and Nikolskaya towers of the Kremlin in 1702-1736. In 1776-1787 architect M.F.Kazakov erected the Senate building opposite the southern façade of the Arsenal. To create a single ensemble, the Senate was combined in size and design with the Arsenal. The main entrance arch of the Senate was located opposite the entrance arch of the Arsenal, and the latter was decorated with elements of classic decor. Thus, the Arsenal, the Senate and Nikolskaya Tower, added in the early 19th century, constituted an integral architectural ensemble of the Neo-Classicism and the Empire.

Another small square—Troitskaya Square— was created at the beginning of the 19th century. In 1806-1809, a majestic building of the Museum—the Armoury Camber was constructed angle-wise to the Troitskaya Tower passage gates according to the design of architect I.Yegotov. The building stretched from north to south almost as far as the Senate. Thereby I.Yegotov kind of solved two tasks: he finished the creation of the ensemble of Senate Square and set up another small square near Troitskiye Gates—between Troitskaya Tower, the western façade of the Arsenal and the northern wing of the museum building.

In 1959, the former Armory, along with several other buildings constructed in the 18th and 19th centuries in this part of the Kremlin, was demolished to build the Kremlin Palace of Congresses according to a design created under the direction of architect M.V. Posokhin (today it is the State Kremlin Palace). The main entrance to this palace is located on Troitskaya Square opposite the Arsenal. 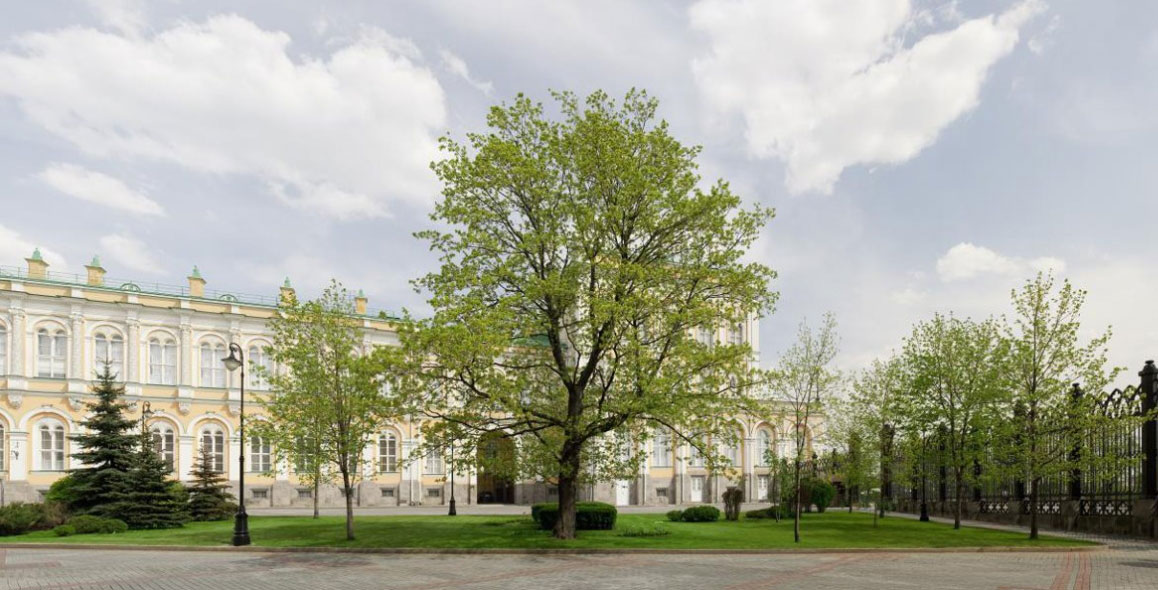 The fifth and the last square of the Kremlin, called Dvortsovaay (Palace or Imperial), was created in the 19th century. When architect K.A.Ton erected the new Imperial Palace's structures in 1838-1850, the square's ensemble was complete. They were built on the same place as the demolished old Grand Princes Palace of Ivan III and the Palace of Empress Elizaveta Petrovna, erected on its foundation in the 18th century. The palace complex later named the Grand Kremlin Palace, comprised new buildings and a part of the surviving structures of the late 15th-17th centuries as well. A unified ensemble of the Grand Kremlin Palace was formed in 1851, with the construction of a new museum building of the Armory Chamber and the Apartment building, adjoining it from the north and connected to the palace complex by the passage. From the very beginning, the Palace Square space was open to the Moskva River and flowed freely into Borovitskaya Street, which ran along the hill edge. An openwork cast-iron lattice with a pattern in the 19th-century pseudo-Gothic style separated the square from the carriageway.

Large-scale construction of the 18th-20th centuries certainly has significantly changed the appearance of the ancient residence on the Borovitsky Hill. But it is interesting to note that this construction was mainly carried out in consideration of the historically established planning of the Kremlin. Its ancient streets and lanes though being dissolved in the newly created squares, at the same time defined their size and configuration. Old passage towers played a significant role in the ensembles of the new squares. They served as a compositional axis, the starting point of construction of the whole ensemble. That is why today 'the Kremlin Đˇity' is a unique architectural and artistic ensemble, created based on the synthesis of the Old Russian tradition and urban planning art of the Early Modern period.