The Borovitskaya Tower (former Predtechenskaya, the Precursor's) is situated on the south-west side of the Borovitskiy Hill. It was named after the grove («bor» in Russian) that covered this side of the hill.

The tower was built in 1490 by Pietro Antonio Solari and used to be an entrance passage to the services area of the royal estate separated from its gala part with a brick wall erected in 1499.

In 1658, under Tsar Alexey Mikhailovich, the Borovitskaya Tower was renamed the Precursor’s after the Church of John the Percursor under the Bor. However, the tower’s old name has been preserved up till now. 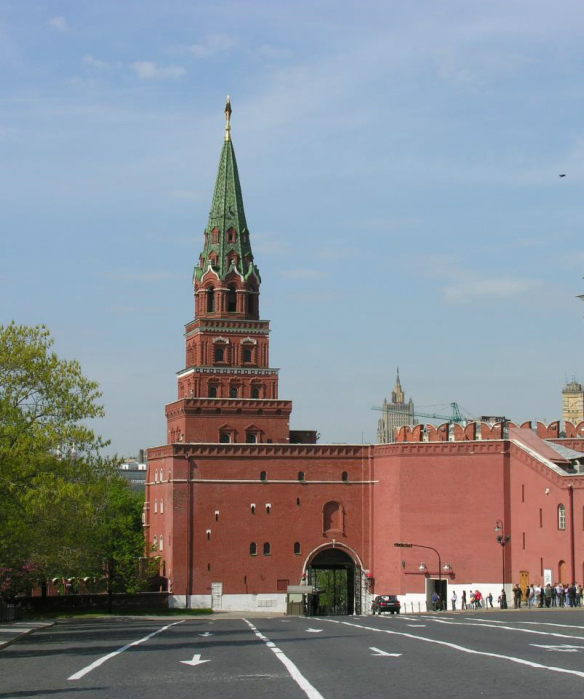 In 1680, the tower was overbuilt with a stone marquee that gave it a pyramidal shape. At the same time, a side-strelnitsa with a gate and a drawbridge over the Neglinnaya River was attached to the tower. During the tower ‘s renovation in the XVIIIth century, it was decorated with pseudo-Gothic elements. In 1812, when the neighbour Vodovzvodnaya (Water Supplying) Tower was blowing, the Borovitskaya's marquee crashed. It was reconstructed under the supervision of Ossip Bove in 1816-1819. In 1848, the altar throne from the Church of John the Precursor under the Bor was transferred to the tower, and the pseudo-Gothic elements were removed.