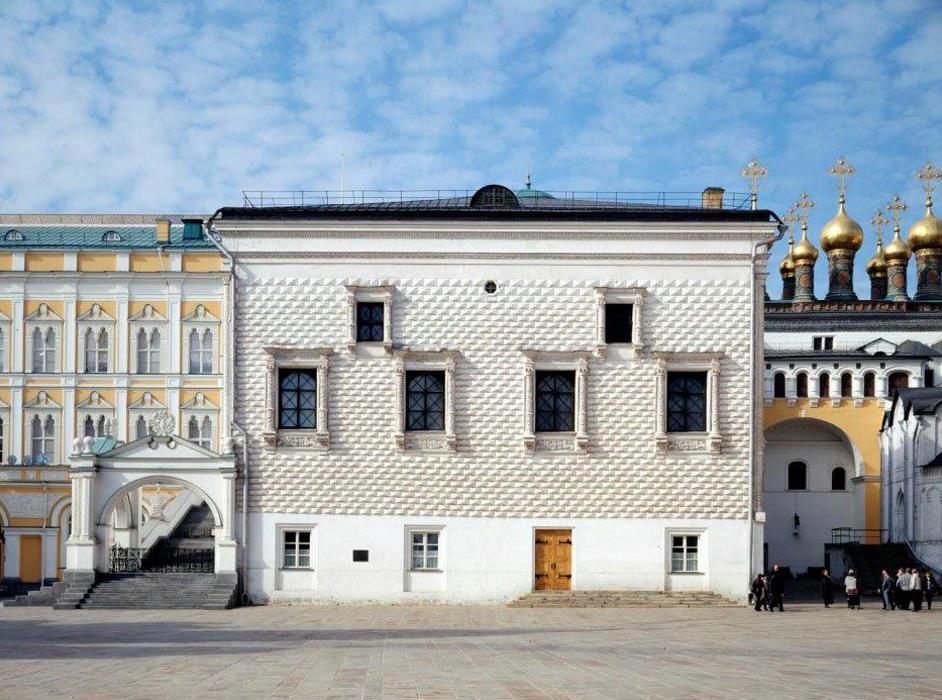 The Faceted Chamber was founded in 1487 by an Italian master Marco Friazin as a ceremonial throne hall for solemn receptions in a new Grand Princely Palace of Ivan III. Its construction was finished in 1491 by a Lombard architect Pietro Antonio Solari.

The building is made of brick. The reception hall in the form of a one-pillar chamber covered by four cross vaults is located on the high basement floor. The outer entrance hall called the Holy adjoins it from the west. An open stone staircase, the Red Porch, leads to the south side of the Holy outer entrance hall. A square chamber covered by vaults resting on walls and a central pillar is the most widespread type of solemn halls in Russian civil architecture of the 15th-16th centuries. During two centuries the Faceted Chamber with an area of 495 sq.m. remained the largest hall in Russian architecture.. 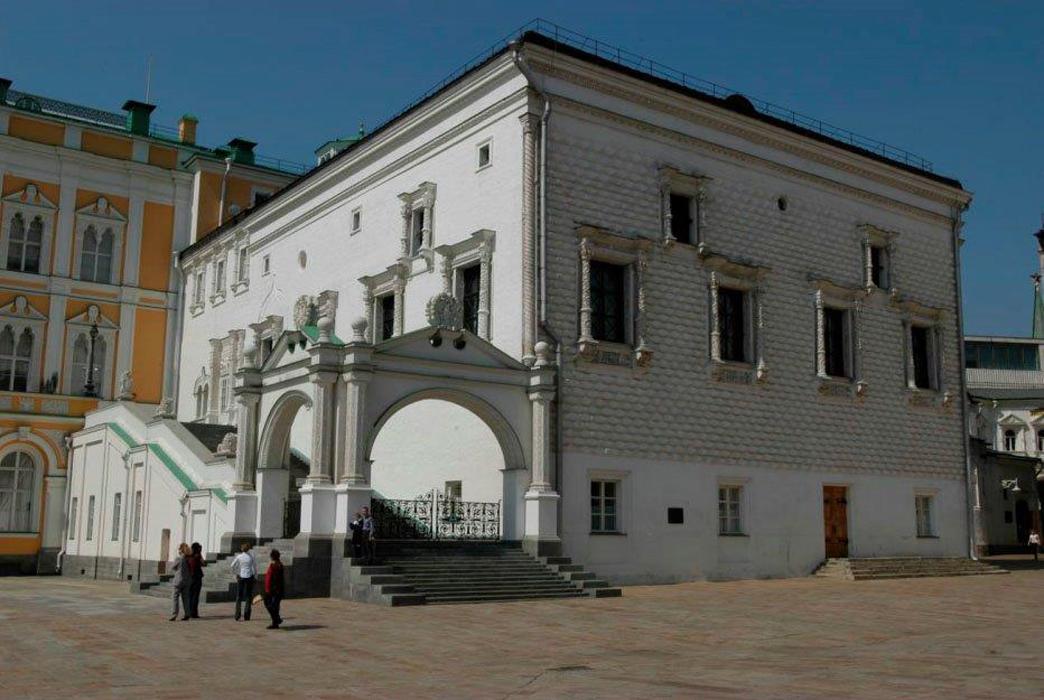 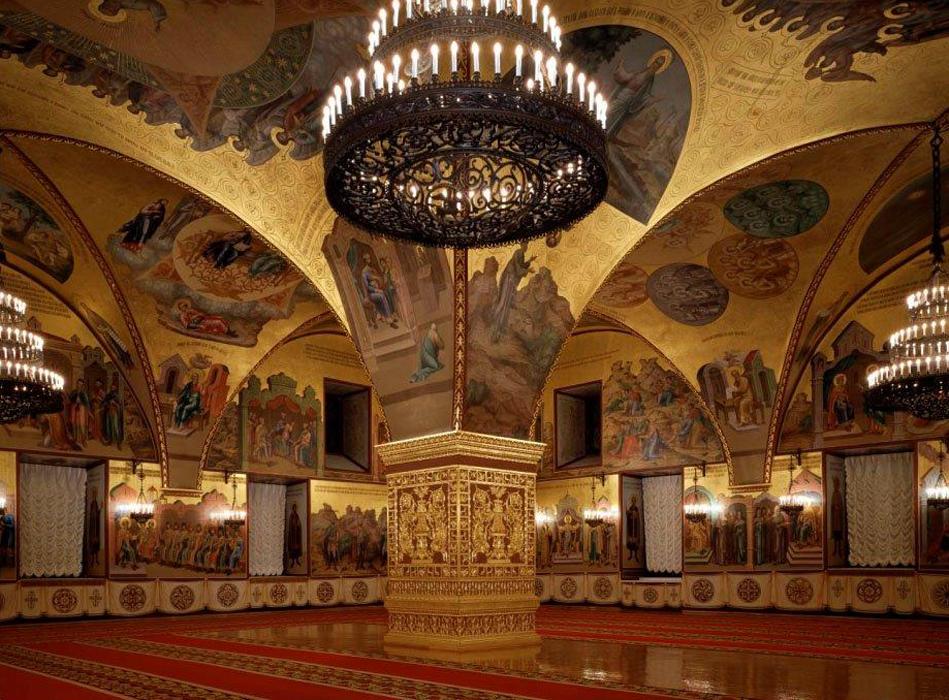 The palace got its name from the architectural solution of the main eastern façade facing Cathedral Square. It is lined with white stone blocks, each faceted on four sides. Such stone processing typical of Italian Renaissance architecture was called "diamond rustication". The side façades had smooth brick surfaces, painted in imitation of a brick ". As graphic materials show, the Faceted Chamber was topped by a high four-slope gilt roof. The present low three-slope roofing was made in the 19th century. The original window openings were in the form of paired pointed arches, separated by an impost and taken in a rectangular frame, similar to the windows of Italian palazzos. The existing windows with their Baroque surrounds date to the last quarter of the 17th century. 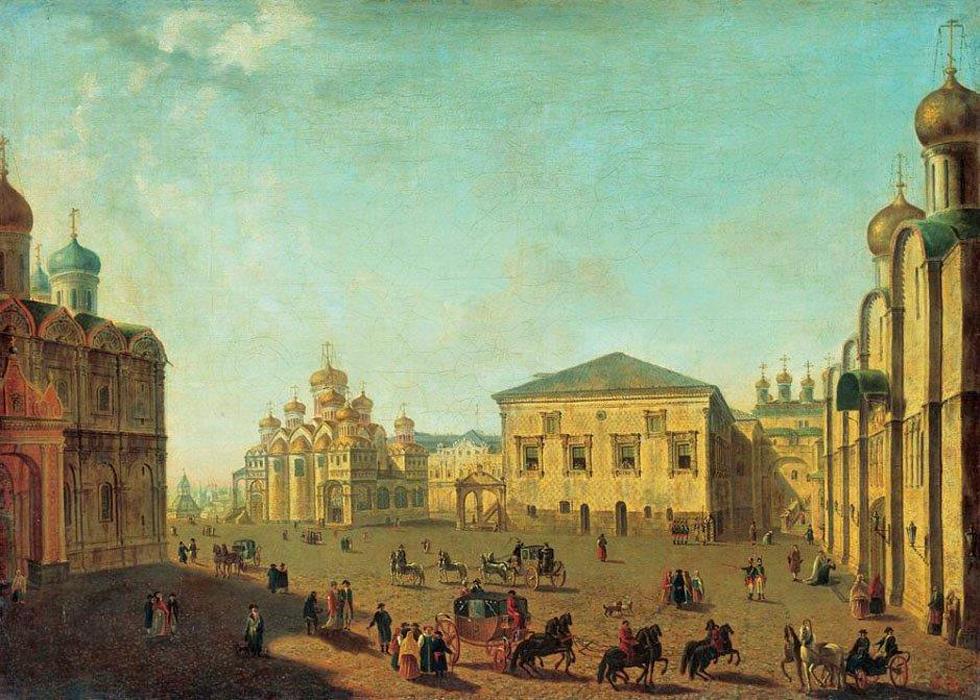 The strongly protruding volume of the palace with richly decorated main façade, which gives a deep light and shade, plays an active role in creating the architectural appearance of Cathedral Square.

Interior walls and vaults were painted with frescoes in the 16th century. In 1668, Simon Ushakov renewed the murals, compiling a detailed description of the subjects. The extant wall painting was done by Palekh icon painters in 1881 under Ushakov's record.

During the construction of the Grand Kremlin Palace in 1838-1849, the Faceted Chamber was included in the new palace complex and was connected with St Vladimir Hall via the Holy outer entrance hall.

During restoration works in 1967-1968 a unique carved white-stone portal in the western wall of the chamber and a relief decor of the central pillar was restored. In 1992-1994 the Red Porch demolished in the 1930s was rebuilt.

At present, the Faceted Chamber is one of the representative halls of the Russian President's Residence.