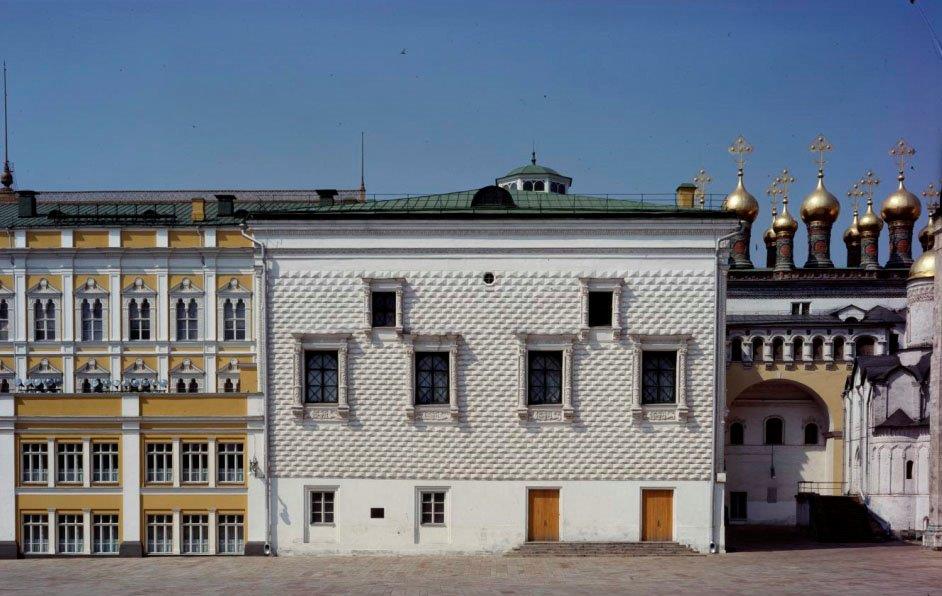 The Golden Tsarina's Chamber is a part of the palace complex, erected in the Kremlin in the late 15th - mid 19th centuries. It is situated on the eastern side of the workshops chambers, built in the mid-16th century on the base of the late 15th - early 16th-century palace, and was presumably part of it, acting probably as a front room for the women's half of the building. It was first mentioned in sources of 1526 under the name of Naugolnaya. Along with the Faceted Chamber, it is the oldest extant civil structure of the Kremlin.

In the 1580s the chamber was rebuilt and richly decorated as a ceremonial reception hall for Tsarina Irina Godunova, the wife of Fyodor Ivanovich. Its walls and vaults were painted with frescos on a gold background, hence its second name "Golden". The unique theme of the murals corresponds to the purpose of the chamber: scenes from the lives and feats of the famous Byzantine queens Irene, Theodora and Sofia, Russian Princess Olga and Georgian Queen Tamara. 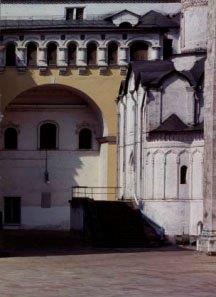 Almost square in design, the brick volume of the chamber is covered by a cloistered vault on spandrels, while the anteroom adjoins it on the west side. The anteroom or Gatekeeper's chamber was called Zhiletskaya in the early 17th century, as it housed the palace guards and servants.

The surviving fragments of the exterior decor - a white-stone carved entablature and carved window frames - tell us about the original architecture of the chamber's facades, which reveal features of the Italian Renaissance.

After the construction of Verkhospassky Cathedral above the Golden Tzarina's Chamber in the 1630s-1640s and the gallery along its southern façade, it ceased to exist as an independent volume from the outside. At present, a part of its eastern façade can be seen from the Cathedral Square under the gallery, which surrounds eleven-domed churches of the Terem Palace. 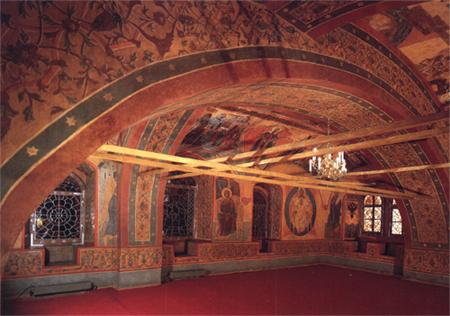 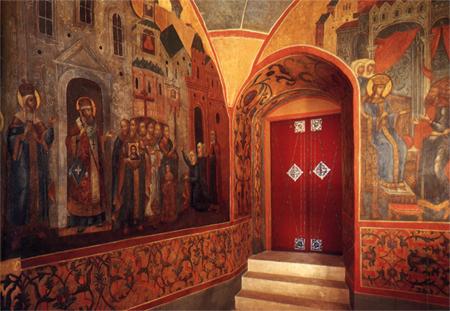 In 1683, to strengthen the chamber's vault, which had been overloaded by the repeated reconstructions of the upper Terem Palace's churches, two mutually intersecting strengthened arches were put under it and tightened with airy metal ties. That destroyed the interior of the chamber, depriving it of harmony and expressiveness.

The painting of the chamber was renewed more than once, preserving the subjects and composition. Its restoration in 1925 and 1947 uncovered two fragments of frescoes dating back to the 16th century.

At present, the Golden Tzarina's Chamber as a part of the Grand Kremlin Palace is one of the premises of the Presidential Residence.