CHURCH OF THE NATIVITY OF OUR LADY ON ANTEROOM 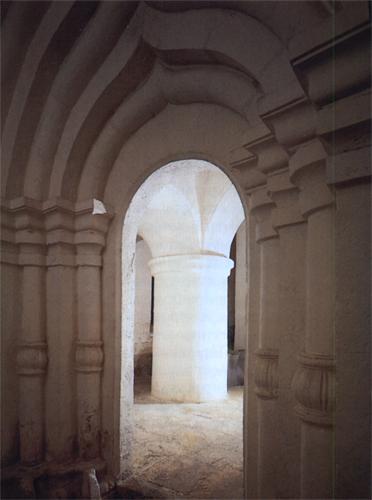 The Church of the Nativity of Our Lady on Anteroom is the oldest surviving monument of the Kremlin architecture. It was built in 1393-1394 on the order of Princess Evdokia, the widow of Dmitry Donskoy, presumably to commemorate the Battle of Kulikovo. This is evidenced by the dedication of the church to the Nativity of Our Lady, which coincides with the date of the Kulikovo Battle, according to the Christian calendar. The new church replaced the wooden Church of the Raising of Lazarus and was attached to the female side of the princely palace as a private church.

The four-cupola three-apse church, built of white stone, is preserved up to the half height of the walls with the main portal and part of the windows. Round western pillars carry a vaulted ceiling of the choir which can be reached by using the interior wall staircase located in the northwest corner. The architecture combines features of Vladimir-Suzdal (round pillars, portal framing, and "spatulas") and early-Moscow architectural schools. The keel-shaped completions of the portal and niches, as well as rose windows testify to belonging to the latter.

The church was painted by Theophanes the Greek and Daniil Cherny with his pupils in 1395. In 1479, probably because of fire, the top of the building collapsed but the church was soon rebuilt. Along with the construction of the new stone grand princely palace, Aleviz Novy (Aloisio the New) also reconstructed the Church of the Nativity of Our Lady in 1514. The architect kept the old church in the capacity of the podklet (basement), but added a new volume to it, which housed the main altar. The podklet was devoted to the Side Chapel of Lazarus, formerly located at the altar. There is almost no information about the shape of Aleviz's temple. The drawing "Kremlenagrad" of the early 1600s shows the best clear picture of it — a three-dome church with three apses and two side chapels that most probably were built not earlier than the second half of the 16th century.

The most radical reconstruction took place in 1681-1684 under the reign of Fyodor Alexeevich, when the church built by Aleviz was replaced by a one-domed church with a rectangular altar and a refectory on the western side. The Side Chapel of Lazarus was abolished, and in the 18th century the podklet was turned into a storage room. At the beginning of the Grand Kremlin Palace construction in 1838, the Side Chapel of Lazarus in the ancient podklet was restored, and the eclectic details in the style of the 17th century were added to the architectural design of the Church.

The fundamental restoration of the most ancient monument of the Kremlin and Moscow which preserved on the level of the podklet was carried out in 1923-1928 and in 1949-1952.