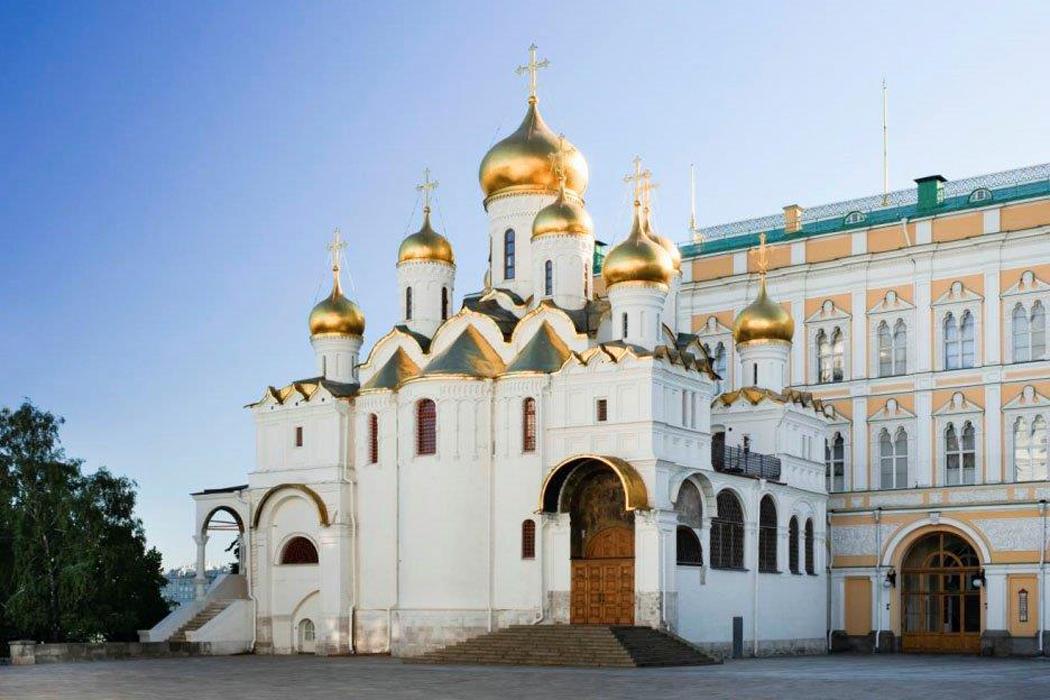 The Annunciation Cathedral was built in 1484-1489 by the same team of Pskov masters as the Church of the Deposition of the Virgin's Robe in the metropolitan's courtyard. It is situated in the southwest corner of Cathedral Square on the place of a 14th-century stone Church of the Annunciation. That ancient church had already served as a court private church of the great prince. It was raised on a high basement (podklet) and joint with the palace by a covered passage. In 1416 the temple is rebuilt, it increases in size and becomes three-apsed. At the same time, the walls of the ancient basement are thickened by new whitestone masonry almost twice.

During the reconstruction of the Kremlin under Tsar Ivan III, the Pskov masters dismantled the church to its basement and, having strengthened the latter, erected a new brick cathedral above it, enclosing it on all sides with galleries on basements, with an entrance ending the northern porch, and a half-opened perron adjoining the south-eastern part of the gallery.The southern porch was already a separate enclosed space. A small cubical volume of the cathedral was crowned with three cupolas, two of which stood above the east corners of the temple. The walls of the cathedral are divided vertically into three rows, finished with keel zakomaras and belted with an arcature. Domes of the cupolas are decorated with a belt of triangular concaves, sawtooth brickwork, and patterned bricks placed flat or on a side reminding the décor of the Pskov churches. The cathedral of 1484-1489 became a compositional framework of the existing building.

The side chapel, located at the south gallery, was renovated in 1562-1564. The south porch, previously open, became roofed. Four single-cupola side chapels were erected above the corners of the gallery.

Two more blank cupolas were erected over the vaults of the cathedral in the same years. The temple acquired the existing nine-cupola structure. The cupolas and the roof were covered with a gilt copper and the cathedral began to be called golden-domed. 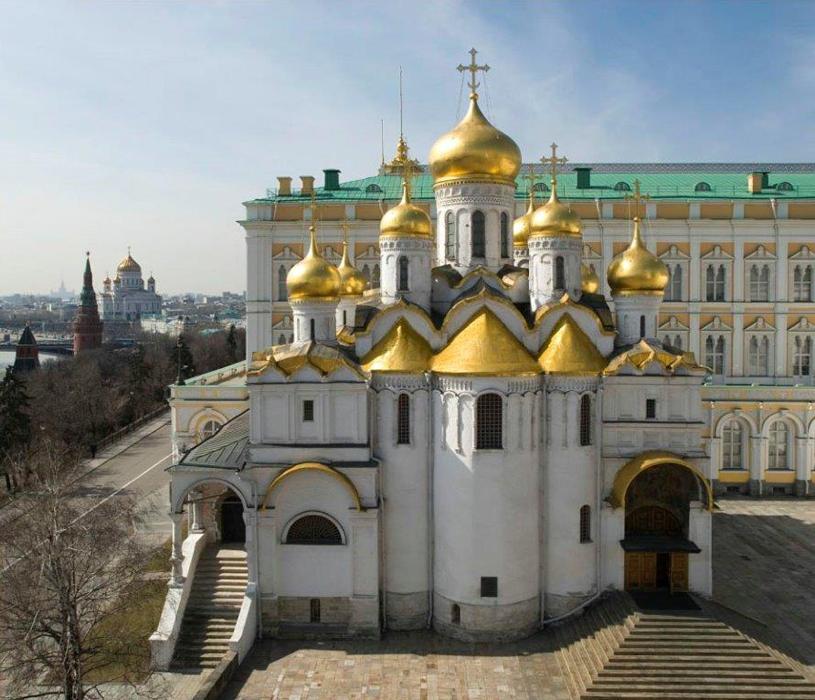 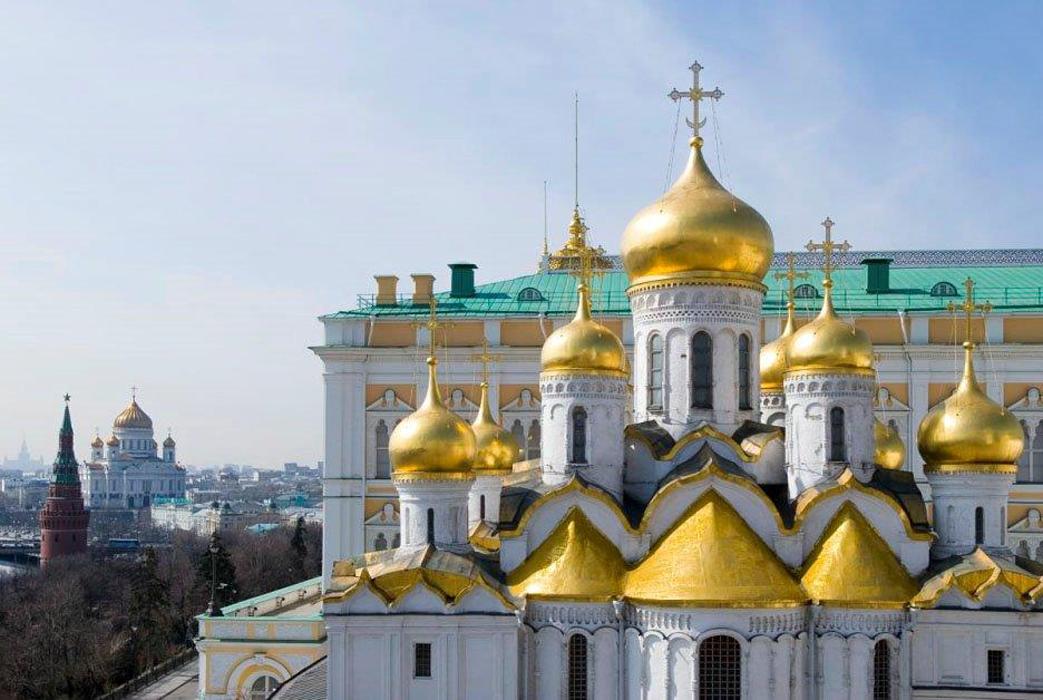 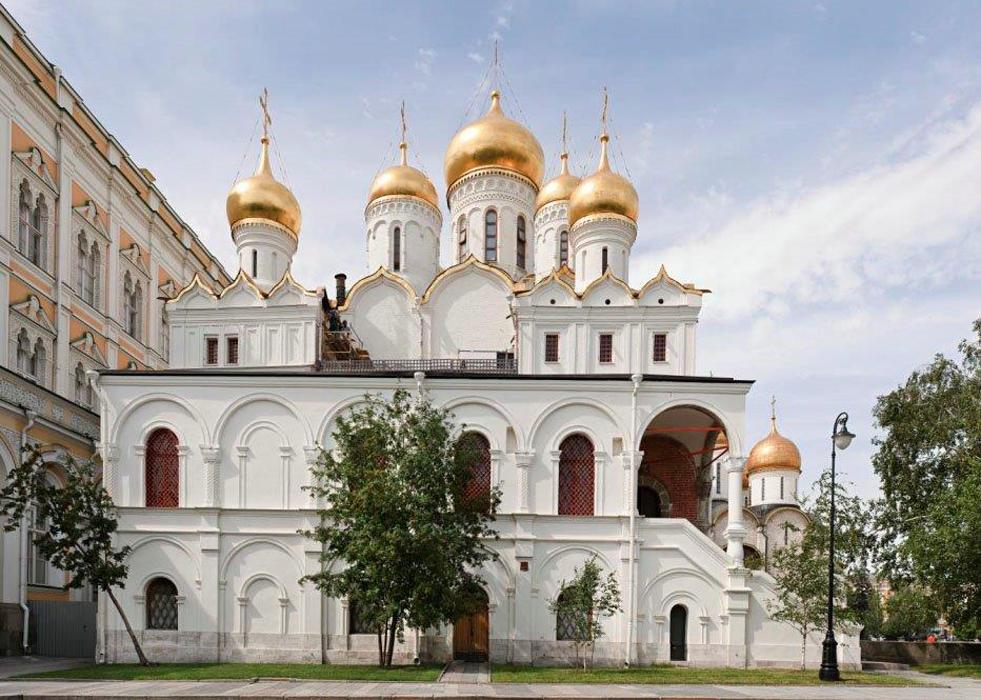 The basement (podklet) served as the base of the Annunciation Cathedral of the late 14th century. It is square in a floorplan with one apse. Inside it is 7.7 metres and the walls are 1.5 metres thick. The walls of the basement are laid of roughly hewn white-stone blocks, often without keying and strict adherence to the rows' horizontality. The thickness of masonry layers varies from 30 to 45 cm.

More about the Annunciation Cathedral >>