The Assumption Cathedral was erected in 1475-1479 by the Italian architect Aristotle Fioravanti instead of two previous churches.

All stages of the construction of the main temple of the state are reflected entirely in the chronicles. The Italian architect was asked as the sample to take the Assumption Cathedral of Vladimir—a five-dome cross-domed temple of the 12th century. Aristotle Fioravanti reproduced the most significant features of the famous cathedral in his work but creatively combined them with a Renaissance conception of architectural space.

The Moscow Assumption Cathedral is a big building supported by six pillars, having five apses and five domes. It stands on a high great base, much of which is now hidden under the embankment of Cathedral Square. The building is complete by arches and cross vaults based at one level on columns and internal lesenes (an architectural ornament: a narrow, low-relief, vertical pillar in a wall). The cathedral is built of drafted blocks of white stone with brickwork backfilling. Vaults, drums, columns and altar screen are made of brick.

The cathedral's floorplan represents twelve equal squares, four in each nave. The uniform arrangement of the pillars, which divide the space into equal sectors, is almost its main characteristic. The absence of the chorus and the levelling of the central under-dome space strengthens the impression of a vast and hall-like interior. The diameter of the central drum is three meters larger than the others. Its thin, two-brick walls are set on external perimeters of the columns. All vertical sections of the facade are equal in width; the main façade overlooking the Cathedral Square of the Kremlin has four same-size parts completed with semi-circular corbel arches of the same height.

The use of five low and flat apses in a three-nave floorplan was also an innovation in the structure of the Assumption cathedral. Therefore the altar part is slightly revealed from outside, and from the side of the Cathedral Square it is hidden behind the corner buttress. The building has no crowning cornice, and the façades are divided by an arcature band.

There is no direct replication of any details and techniques characteristic of Italian Renaissance architecture in the Assumption Cathedral. Fioravanti created a work close to his spirit of compositional clarity, austerity and conciseness of architectural forms. At the same time, the traditional features of ancient Russian church architecture had been further developed in new historical conditions. 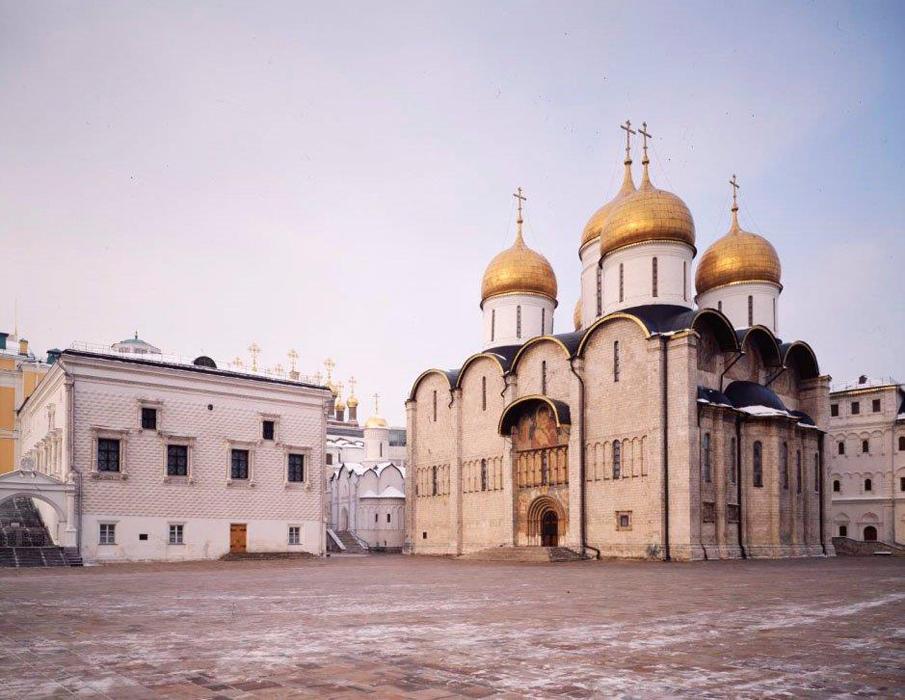 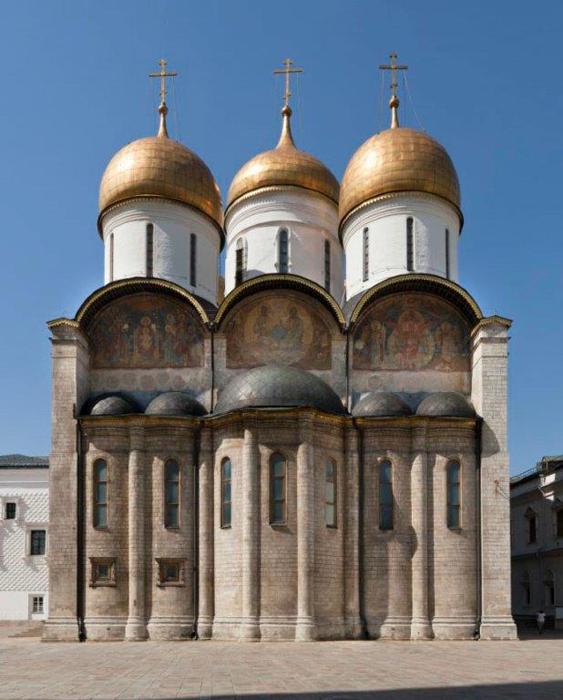 Throughout four centuries the cathedral had been the main temple of Russia: grand princes were enthroned there, and appanage princes swore allegiance to them, tsars were coronated and emperors were crowned there. In the Assumption Cathedral, bishops, metropolitans and patriarchs were enthroned, state acts were proclaimed, and prayers were served before military campaigns and on the occasion of victories.

Today, the cathedral, which houses the shrines of the Russian church heads, ancient murals, and a unique collection of icons, is one of the most visited museums of the Moscow Kremlin. Divine services have been resumed in the cathedral since 1990. 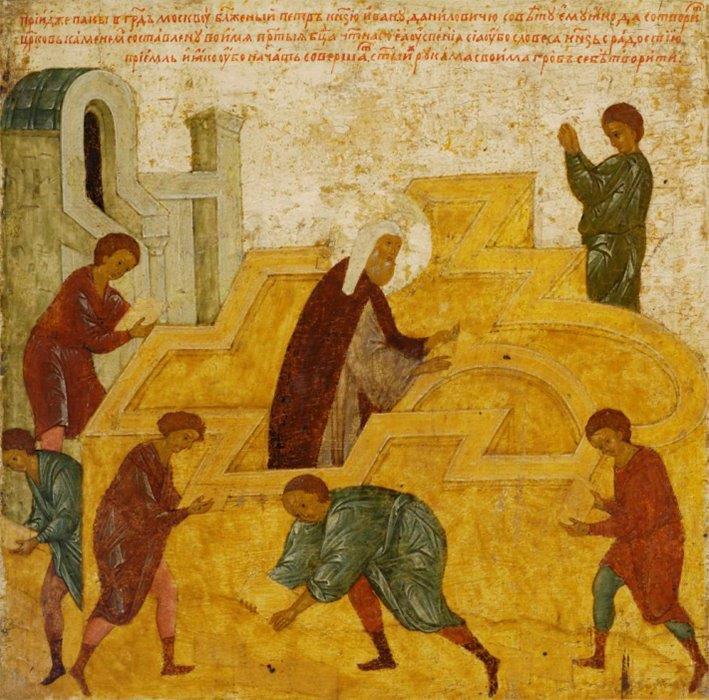 Back in 1327, at the time of Ivan Kalita and Metropolitan Peter, the first white-stone Church of the Assumption of the Mother of God was built on the site of the Assumption Cathedral. According to researchers, it was a one-domed four-pillar temple with three apses, three narthexes and three aisles. The side chapel of Dmitry Solunsky was probably initially situated at the southern altar wall. The second side chapel, bearing the name "Worship of Apostle Peter's Fetters," was built in 1329. The third was founded by Metropolitan Jonah in 1459 and dedicated to the feast of the "Laudation of the Holy Theotokos" in gratitude for the protection of Russia from the Tatar Khan Sayid-Ahmad's invasion. The cathedral stood for almost one hundred and forty-five years and was inextricably linked with the life of Moscow.

By the end of the 15th century, the dilapidated and cramped cathedral no longer met the increased importance of Moscow—the capital of the state. With the new Assumption Cathedral's construction in 1472, a radical reconstruction of the Kremlin began. Moscow builders Krivtsov and Myshkin led the project. By May 1474, the building, being modelled on the Assumption Cathedral in Vladimir, was raised to the vaults but suddenly collapsed. That was caused by an earthquake, bad quality of the mortar and miscalculations in the construction of walls and vaults.

After that, Grand Prince of Moscow Ivan III decided to invite Italian architects famous throughout Europe to carry out his grandiose plan to rebuild the Moscow Kremlin. On 26 March 1475, Aristotle Fioravanti arrived in Moscow and led the erection of the Russian state's main cathedral.

Stages of construction of the main temple of the state 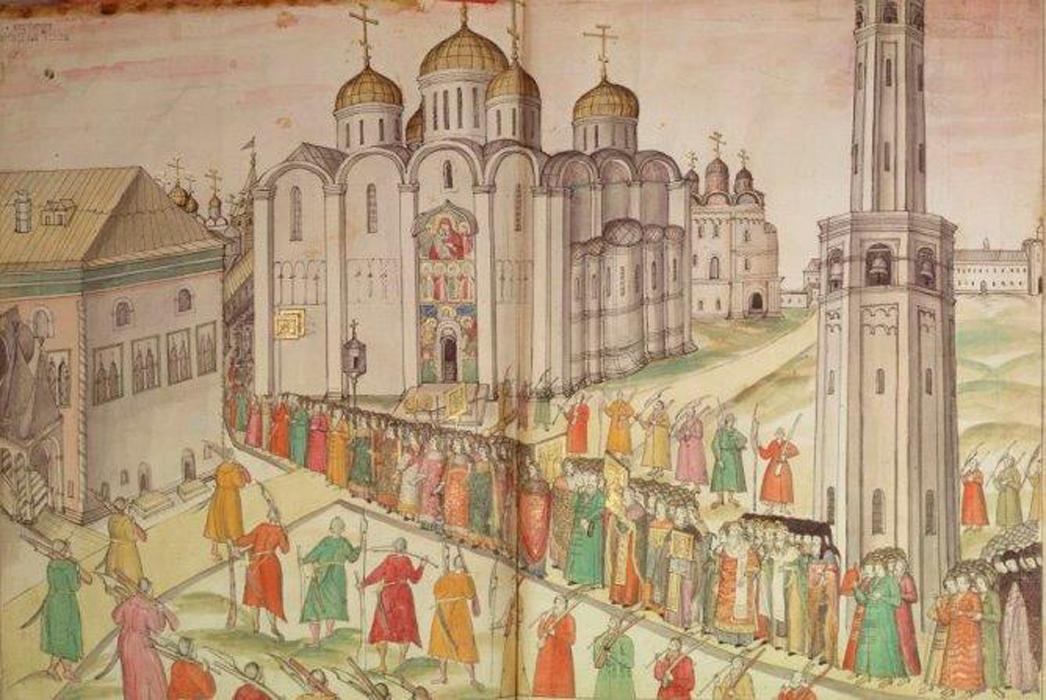 Aristotle Fioravanti first dismantled the cathedral of 1472-1474. Special wall demolition machines were made to demolish the walls. To facilitate the dismantling, the remains of the walls were surrounded with firewood and set on fire. The burnt limestone lost its strength and began to crumble. The speed of clearing stunned Muscovites: "It took three years to build, and in one week and less they ruined it". An attentive author of the chronicle also noted that Aristotle directed to dig deeper ditches for foundations and hammered oak ties into them, filled them with stone and poured them with lime. Such a foundation would have been a reliable foundation for a grandiose temple.

In the first summer already, Fioravanti took the new structure out of the ground and laid four round columns inside the temple and two square ones in the altar. In September, Aristotle was sent to Vladimir to study the model—the 12th-century Assumption Cathedral. Probably, he saw something familiar—after all Romanesque masters, whose artels used to build both in the West and Russia, stood at the origins of the Vladimir land's architecture.

Closely following the construction of the new church, the chronicle marks the thick lime, the mixed technique of construction, the fact that the vaults of the church were laid out in one brick, and iron bindings instead of oak beams. The chronicler did not omit the fact that the foreign architect did everything "by the rule", i.e. checked the correctness of the building's parts with a pair of compasses and a ruler. The work was complete in 1479, and the new temple was solemnly consecrated.

Find out more about the Assumption Cathedral >>