The 'Ivan the Great' Bell Tower ensemble situated at the boundary between the Cathedral Square and Ivanovskaya Square is the focal point of the Kremlin. It took more than three centuries to create this ensemble—from 1505 to 1815. It includes three monuments built at different times— the tower of the 'Ivan the Great' Bell Tower, the Assumption Belfry and the Filaret's Annex. 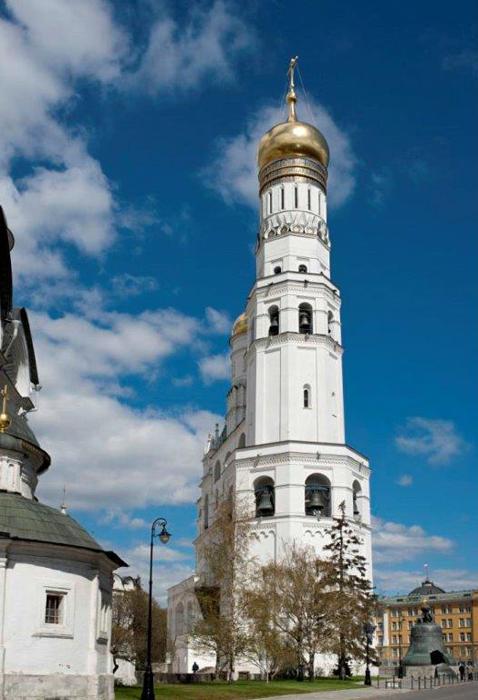 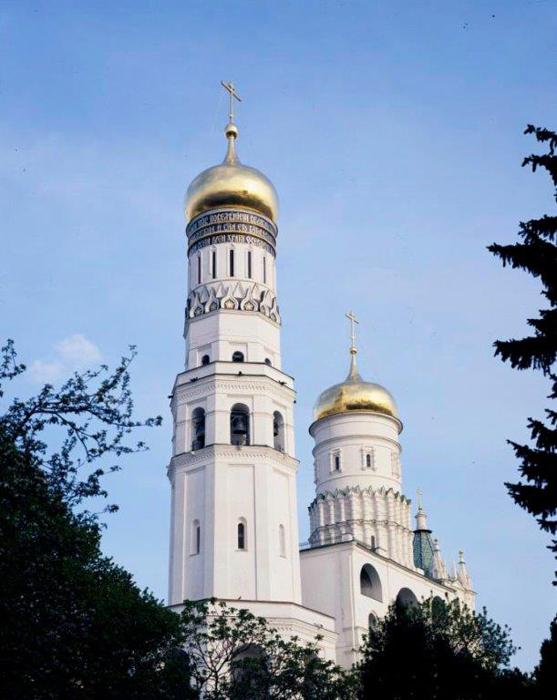 The 'Ivan the Great' Bell Tower was built in 1505-1508 instead of a white-stone Church of St John the Baptist "for the bells", erected under Ivan Kalita in the Cathedral Square. An Italian architect Bon Fryazin constructed an approximately 60-meter-high octagonal building crowned with a dome. The altar from the ancient church was then housed on the first tier of the bell tower.

At the end of the 16th century, Boris Godunov, dreaming of building an Ecumenical temple in the Kremlin similar to the Jerusalem temple, ordered to increase the size of the bell tower by adding a high drum with a gilded dome to it. As a result, the height of the construction, including the cross, reached 81 meters. The ‘Ivan the Great’ Bell Tower remained the highest building in Rus’ for two centuries. The extraordinary lightness and gracefulness of a tower-like building are attained by composite construction of the volumes. Each next tier decreases in diameter and height and has a slightly expressed conic shape. Two lower tiers end with open bell chambers. The upper bell-chamber located at the base of the third octagon smoothly merges into a round drum, and the dome crowns the top. The walls of each tier have slit-like windows, while they are false in the drum. The decor of a bell tower—angular spatulas, shallow concaves and figured eaves between tiers— is restrained and laconic. A gilded memorial inscription announcing the beginning of the Godunov dynasty decorates the top of the drum.

The compositional principle of a dominant vertical got further brilliant development in Russian architecture.

In 1812, French invaders tried to blow up the architectural ensemble of ‘Ivan the Great’ Bell Tower as they were retreating from Moscow. But the bell tower was only slightly damaged and in 1814-1815 was restored.

The monument was repeatedly under restoration in the 20th century. The explorations showed, initially the brick façades with white-stone details used to have natural colour.

At present, this unique monument of ancient Russian architecture houses a museum dedicated to the history of the architectural ensemble of the Moscow Kremlin. 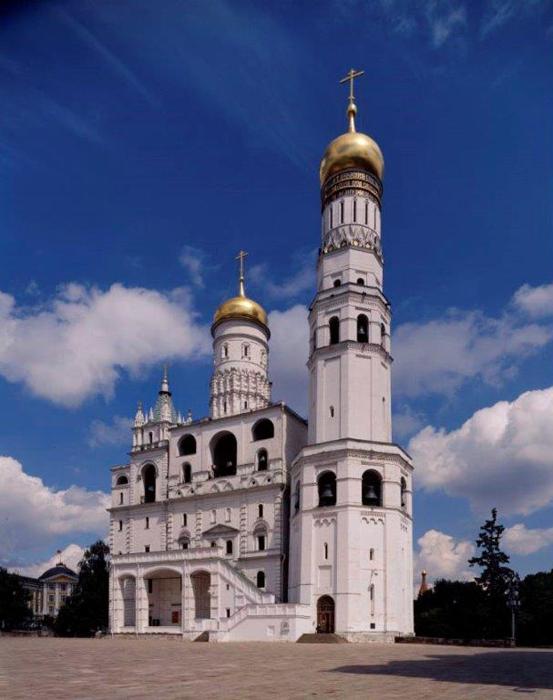 The Assumption (Uspenskaya) Belfry, which adjoins almost right up to the northern facet of the "Ivan the Great" Bell Tower, was built in 1814-1815 by architects D. I. Gilardi, L. Ruska and I. Egotov on the foundation of the 16th-century building destroyed in 1812. Aiming to reproduce the image of the ancient building, the authors repeated its outline and the proportions of the main horizontal and vertical sections of space. However, the elements characteristic of the early 19th century adorn the architectural décor of the façades as well. Above the three-span belfry located on the fifth tier of the structure, there is a richly decorated drum with a gilded dome, similar in scale to the completion of the Bell Tower. A high open porch of the west façade leading to the Church of St Nicholas the Wonderworker of Gastun was erected by architect K. A. Ton in 1849-1852.

Regarding the former edifice, it was built in 1532-1539 by Master Petrok Maliy as the Church of the Resurrection of Christ with a bell-chamber; it was completed in 1543-1552 after the architect left Moscow. In 1555, the church got its new name after the altar of the Nativity of Christ. One can see it in the "Kremlenagrad" drawing of the early 16th century. During the 17th century, the church was transformed into a belfry and called the Assumption. Nowadays, the first floor of the belfry serves as an exhibition hall for temporary exhibitions, while the rest of the tiers house the Museum’s scientific departments. The belfry is used for its intended purpose during church services in the Kremlin cathedrals. 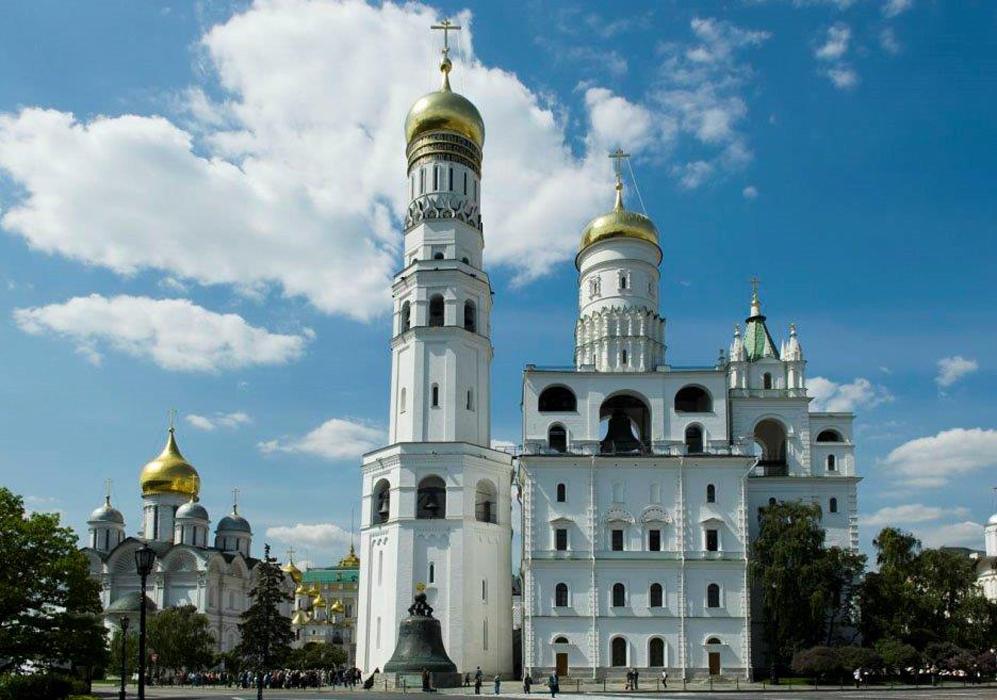 The Filaret’s annex directly adjoining the northern wall of the belfry was also destroyed by the French Army and rebuilt simultaneously with the bell tower in 1814-1815. It was initially built in 1624 by architect Bazhen Ogurtsov as an additional belfry to house a large bell. A square-shaped tower ends with a picturesque tent, the base of which is richly decorated with carved white-stone details. A staircase is attached to the north of the bell tower. The architectural finishing of the façades is similar to that of the bell tower.

Learn more about the 'Ivan the Great' Bell Tower complex >>